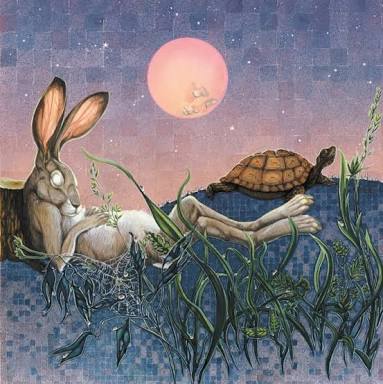 Once there was a hare and the tortoise. They had an argument about who was faster. They decided to settle the argument with a race. They agreed on route and started off the race. The hare shot ahead and ran briskly for some tine. Then realising he was far ahead, he sat under a tree to relax for sometime and soon fell asleep. The tortoise overtook him and emerged as the winner.
The moral of the story is that slow and steady wins the race.

This is the version that we’ve all grown up with. But, here is an interesting version of this story I’ve come across, with a different perspective and can be a good performance enhancer in our life.

The hare was disappointed at losing the race and he did some soul-searching. He realised that he’d lost the race only because he had been overconfident, careless and lax. If he had not taken things for granted, there’s no way the tortoise could have beaten him. So he challenged the tortoise to another race. The tortoise agreed. This time, the hare went all out and ran without stopping from start to finish. He won by several miles.

1.Fast and consistent will always beat the slow and steady.

2.If you have two people in your workplace, one slow, methodical and reliable, and the other fast and still reliable at what he does, the fast and reliable will climb the performance chart than the slow and methodical.

3.It’s good to be slow and steady; but it’s better to be fast and reliable.

But the story doesn’t end here. The tortoise did some thinking and realised that there’s no way he can beat the hare in a race the way it was currently formatted. He then challenged the hare to another race, but this time on a different route. The hare agreed.They started off. In keeping with his self-made commitment to be consistently fast, the hare took off and ran at top speed until he came to a broad river. The finishing line was a couple of miles on the other side of the river. The hare sat there wondering what to do. In the meantime the tortoise trundled along, got into the river, swam to the opposite bank, continued walking and finished the race.

1.First identify your core competency and then change the playing field to suit to your competency.

2.Working to your strengths will not only get you noticed, but will also create opportunities for growth and advancement.

1.It’s good to be individually brilliant and to have strong core competencies; but unless you’re able to work in a team and harness each other’s core competenicies, you’ll always perform below par.

2.By sharing resources and working as team will always beat individual performers.

With a change in perspective, we further learn

And sometimes it is appropriate to do both.

There are always different perspectives, perceptions, and meanings. Be persistent in your efforts to strive for something better.

Looking For Something else?